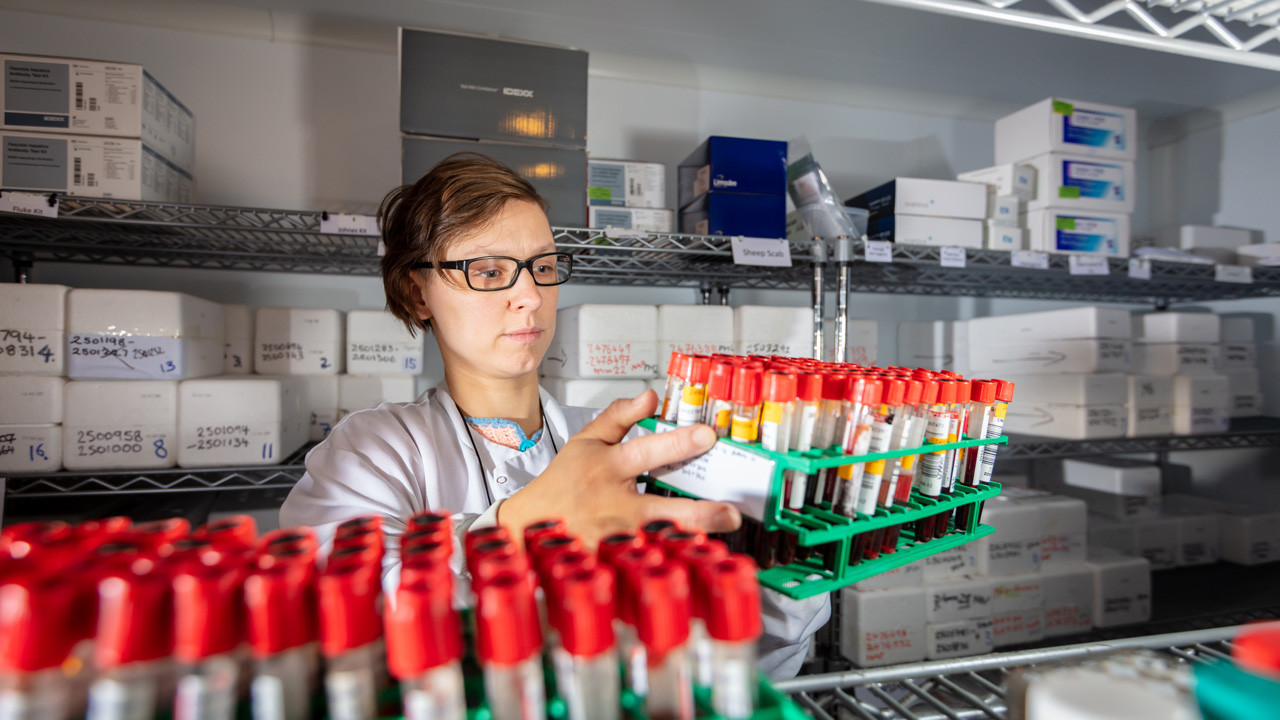 ELISA is one of the cornerstones of our business testing is the, please visit our ELISA page to learn more about this testing method works.

The FAVN is a classical virus neutralisation test and is the method of choice for determining the levels of antibody to rabies virus in serum.

In the rabies FAVN test, multiple serial dilutions of test serum are incubated with 100TCID50 of the CVS strain of rabies virus. After the initial serum virus incubation, BHK-21 cells are added and the test plate is incubated for 48 hours at 37 degrees Celsius. As the strain of virus used in the test causes little or no Cytopathic effect, the test is then read by immunofluorescence.

A D50 endpoint titre (i.e. where 50% of the wells at that serum dilution show the presence of virus) is calculated for each test serum and the control sera by the Spearman Karber method. By international convention, this titre is converted to a value in IU/mL by comparison to a standard serum of known titre.

The Polymerase Chain Reaction (PCR), is the technique used to detect small amounts of DNA and make enough copies of it to be detectable.

All cells, bacteria and viruses contain DNA that is unique to them. When a sample arrives for testing it is prepared by a lengthy digestion and purification process to release all DNA from that sample.

The prepared sample is then added to a PCR mixture containing small pieces of DNA (primers) which match the DNA we are testing for, building blocks of DNA, and a polymerase enzyme which can join the blocks together to make copies of DNA.

If there is DNA that we are testing for in the sample, the matching primers will stick to the DNA, and the polymerase will start making copies of the DNA. Each copy of DNA can then bind the matching primers and another two copies can be made. This chain reaction is repeated up to forty times, resulting in a comparatively huge amount of DNA at the end of the cycle generated from the little that was originally present.

In most of our disease tests we use a fluorescent marker which only fluoresces in the presence of the amplified DNA, the more DNA present the more fluorescence there will be.

If the sample does not contain the DNA we are testing for, there is nothing for the primers to stick to so the polymerase will not make any DNA and there will be no fluorescence.

In our sexing tests when the PCR is finished, the samples are run through a gel matrix and put under a UV light. Any DNA present will glow in bright band(s) which indicate that DNA has been successfully extracted, for female samples we see two bands and for male samples we see only one.

All Biobest virus neutralisation tests follow a similar format. Serial dilutions of heat inactivated test serum are prepared in a 96 well plate and are incubated with a set amount (usually 100 TCID50) of infectious virus.  Following this incubation, virus susceptible cells are added to the virus-serum mixture, and the final virus/serum/cell combination is incubated for a period of 2-3 days.

After this incubation period the test is read by examining each well of the plate for the presence of viral infection. Depending on the virus, this may be by direct microscopic examination of the plate for evidence of viral Cytopathic effect (CPE) or, if the virus causes little or no CPE, by immunofluorescent staining of the test wells for the presence of viral antigen in the cell monolayer.  Sera which contain antibodies to the virus in question are able to neutralise the aliquot of virus used in the test, thus preventing infection of the cells when they are added to the plate. Where high concentrations of antibody to the virus in question are present in the serum sample, virus neutralisation will occur even at high serum dilutions.

Conversely, where little or no antibody to the virus is present in the test sample, it will be unable to neutralise the aliquot of infectious virus at the first dilution used in the test. The result of the test is the point at which the serum sample has been diluted such that it is no longer able to neutralise all the virus in the test. This dilution, or its log equivalent, is reported as the titre of the serum tested.

Biobest Laboratories produces immunofluorescence assay (IFA) test plates and slides by immobilising cells infected with virus or parasitic tachyzoites by chemical fixation. Samples are added to the test plates or slides at several dilutions and incubated at core body temperature; if antibodies to the antigen are present in the sample they will bind to the antigen during this incubation. The tests are washed to remove any antibodies which have not bound then a suitable anti-species antibody conjugated to a fluorescent marker is added. this secondary antibody will bind to any antibodies which were present in the sample and had bound to the antigen. The tests are incubated then washed again before being read by microscopy using ultra violet illumination. The fluorescent marker glows with a bright apple green fluorescence under the UV light indicating the presence of specific antibodies bound to the antigen. The pattern of fluorescence observed often confirms the specificity of the reaction. The sample antibody titre is the last dilution of the sample to show this specific fluorescence.